The Bible is the Best Evangelism Tool, Not Movies 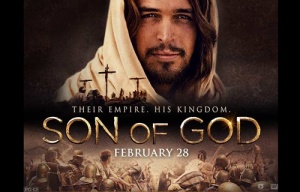 So the Son of God movie hit theatres recently and has created quite the buzz. I’ve heard a mixture of reviews, some that condemn it as practically Satanic and others that hail it as the precursor to the next mass revival. I’d better say this upfront – I haven’t seen it, and I’m not sure I will. I don’t really care one way or the other. But, I did want to address at least one important thing hovering around this whole circus.

Many churches are planning very strategically for an evangelistic push to go along with the film. There are curriculums, study guides, and discussion starters that you can purchase that are meant to ignite good evangelistic dialogue with unbelievers. Some churches are even renting out theatres for their people to bring family and friends to. To the effort that is going into sharing the gospel I would give a hearty “amen!” But to the underlying belief I would like to give a word of caution.

Evangelistic movies have been around for years, basically as long as movies have been made. Billy Graham’s organization was producing movies as far back as the 1950’s, and overall I think it is a worthwhile initiative for believers to invest in. At the same time, however, we need to be careful not to place too much hope in film as a presenter of the gospel. Just recently I read on the back of an evangelistic movie a prominent pastor endorse the film by saying these words:

If this [film] doesn’t get a non-believer thinking about life without Christ, nothing will!

These words deeply saddened me and ticked me off at the same time. To hear a minister say that, when it comes to evangelism, nothing could trump a good movie is a serious misstatement. If that were true, when you look up Romans 10:17 it would say that “faith comes from seeing, and seeing from the silver screen.” But it doesn’t say that. Instead it says:

So faith comes from hearing, and hearing through the word of Christ.

Don’t get me wrong. I’m not down on movies or creative evangelism. I think we should be doing those kinds of things and using as many mediums as possible to spread the gospel of Jesus. Yet at the same time, we should never lose sight of the fact that God has promised to bless his Word, and we should make that our priority in evangelism.

There is one powerful example in the Bible about relying of the power of the truth of God’s Word when it comes to evangelism. In Luke 16, Jesus tells a parable about an unnamed rich man and a poor man named Lazarus. They both die, and the rich man ends up in hell while Lazarus ends up in heaven. The rich man, wanting his still-living family members to avoid sharing his same fate, asks Abraham to send Lazarus to his family and warn them. The story continues:

Abraham says that if unbelievers won’t listen to Moses and the Prophets (a reference to the Bible), then they won’t be convinced even if they are visited by someone from the dead. In other words, the Bible is a more powerful evangelistic tool than a ghost showing up to preach the gospel. I’m pretty sure it is safe to say that a visit from the dead is more incredible than a decent movie. And if that is the case, then the Bible is hands down better than any movie produced for the purpose of evangelism.

So, go ahead and use movies, tracts, music, or whatever other evangelism methods you can to tell people about Jesus. Just make sure they are based on the Word, and know that they can never fully replace the Word of Christ.