What is Common Grace? 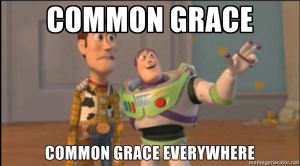 Common grace is a term in Christian doctrine that refers to the goodness of God that is poured out on both believers and unbelievers. It is “common” in that it is universal – every person experiences degrees of common grace. It is “grace” in that we don’t deserve it. Common grace is to be differentiated from, for example, saving grace, which only a born-again person experiences. The Christian has experienced special grace in numerous ways that a non-Christian hasn’t.

These, and many others, are examples of special grace. By contrast, common grace is not exclusive to only Jesus-followers. It is a universal experience that is given to all in various forms. It is not dependent upon a person’s standing with God. In fact, everything that is worth celebrating in life is a result of common grace, since God doesn’t owe anyone anything. As Jesus’ brother, James, says…

James 1:17 Every good gift and every perfect gift is from above, coming down from the Father of lights with whom there is no variation or shadow due to change.

Anything that is enjoyable in life is a gift from God that is given because of God’s common grace. There are any number of examples that could be mentioned:

The list is literally endless. Though the “amazing grace” of salvation we sing of is known only by some, God’s common grace is experienced by all in measures we can’t even begin to quantify. The old saying to “count your blessings” is an ode to how much of God’s common grace each one of us enjoys every day. It’s too bad we’re not more thankful for it!

I don’t really like the term “common grace” because there’s nothing really “common” about it. When I think of something as common, it feels boring. Common things are easy to ignore, and they make us shrug our shoulders. But God’s good gifts should not be treated that way. I prefer “universal grace” or even “daily grace”, but the concept is more important to get right than the term is.

Psalm 145:9 The LORD is good to all, and his mercy is over all that he has made.

It could be said that even the offer of salvation is a gift of common grace. The promise of John 3:16 is true for anyone who believes, and so the offer of forgiveness and eternal life is evidence that “the Lord is good to all”.

Jesus also taught that God is good to both the righteous and unrighteous.

Matthew 5:45 For he makes his sun rise on the evil and on the good, and sends rain on the just and on the unjust.

Luke 6:35 But love your enemies, and do good, and lend, expecting nothing in return, and your reward will be great, and you will be sons of the Most High, for he is kind to the ungrateful and the evil.

It is this aspect of common grace – that it is given to all – that makes it a wonderful thing. Though God does give certain graces only to certain people, he is still a God of grace to all, even those who spit in his face.

Common grace has a few important effects on human life that should be noted. One is that Christians can still learn from non-Christians. We fool ourselves if we think that the unredeemed have nothing of value to offer us. What an arrogant position to take! God’s common grace means that unbelievers have valuable things to teach us. Though Scripture is still the standard for measuring truth, let’s not forget that God opening our eyes to the gospel is not the same as giving us exclusive access to truth.

Another thing common grace results in is the restraint of evil in the world. Even to those who are not in submission to God, who are resisting the Holy Spirit, who desire to do evil and have little moral compass are held back from committing worse evil by God’s common grace. Scripture shows this in a few places.

When Abraham was deceitful about his wife Sarah being his sister, and had allowed her to be taken by Abimelech, God states that it was divine intervention (read, common grace) that stopped Abimelech from becoming sexual with Sarah and unintentionally committing adultery.

Genesis 20:6 Then God said to him in the dream, “Yes, I know that you have done this in the integrity of your heart, and it was I who kept you from sinning against me. Therefore I did not let you touch her.”

None of us can really know for sure just how much sin God has held us back from committing. But each of us should be grateful for the grace that God gives us even when we are not aware of it.

Not only does God restrain evil for specific people, but he does so in society as a whole. This is evidenced by the good deeds that even unbelievers do. Non-Christians, who don’t necessarily follow God’s laws, still often have integrity and a sense of right and wrong that is godly. This is a result of God’s common grace.

Again, who knows exactly how much sin God restrains in society and across the world? But because the Bible describes mankind as being desperately wicked, we are safe to assume that the world would be even worse off than it already is if not for the goodness of God in making life on this evil planet bearable.

← Two Types of Prayer
The Invaluable Presence of Dad →