The Sentence That Should Have Ended 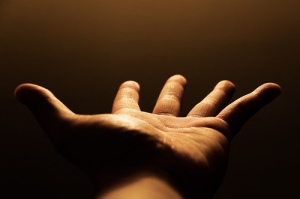 As I was reading my Bible the other day, a thought struck me from my time in the gospel of Mark. Recorded in Mark 3:1-6 is a brief but powerful story about Jesus healing a man with a withered hand. The account begins:

Again he entered the synagogue, and a man was there with a withered hand. [2] And they watched Jesus, to see whether he would heal him…

Now if the sentence had ended there, everything would be great. Here comes Jesus, the most interesting and controversial and exciting person on the planet. He shows up at the local synagogue, and not surprisingly, everyone follows him there. Jesus had a way with drawing together a crowd. The people cram inside, and try to find a place where they can see and hear everything that is about to happen. After all, when Jesus shows up, something crazy is bound to go down!

So there they are, huddled in the synagogue, and they see Jesus take notice of a man up near the front who has a withered hand. Chances are the people know this young man. He’s probably a local, and people with disabilities – for better or worse – just tend to stick out. Jesus and the young man make eye contact. Jesus’ expression changes. He begins to move towards the man. There is a sense of anticipation in the air. Mark says “they watched Jesus, to see whether he would heal him…” And who could blame them? I’d be watching like an eagle too! If someone is gonna get healed, I want to see it! Show me the miracle!

Except, that’s not really how it happened. The sentence doesn’t end there.

And they watched Jesus, to see whether he would heal him on the Sabbath, so that they might accuse him.

No, they were there with a different agenda. They were there to trap Jesus. To catch him doing something “unlawful”. To see if he would slip up and sin by a technicality. To find fault with him. To find reason to pounce on him and take him down.

They had no love. Not for Jesus. Not for the man. They only thing they loved at that moment was their own sense of power.

Isn’t this so sad? Here is the opportunity of a lifetime! The chance to see the Son of God in action, to not only see a genuine miracle, but at the hands of Christ no less! Does it get any more fantastic than that? And yet, because of their hardness of heart, they miss the whole thing. Jesus does indeed heal the man. Yet instead of rejoicing and celebrating and worshipping, the people immediately begin to plan how to destroy Jesus.

Here’s the truth: This is not an isolated event. This is not something out of the ordinary. And I’m not just talking about the response from people in Jesus’ day. Sure, it was common for people to resist Jesus during his life. He did get murdered after all! But I’m talking about the present day, the people of the world in general and you and I included. The reality is that many of us miss what Jesus is doing because of our own selfish motives. We have our own ideas about what God should be doing and how he should be doing it. Yet Jesus doesn’t march to the beat of our drum. He is the sovereign Lord of the universe. He does as he pleases. He works in people’s lives the way he sees fit, and some of us are so caught up in our own little world that we miss the chance to see a miracle.

How does this make Jesus feel? We don’t have to speculate the answer. Mark tells us (vs. 5):

And he looked around at them with anger, grieved at their hardness of heart…

Jesus was ticked off. He was mad. He was not at all pleased with the response. Most of the time we picture Jesus as loving and compassionate and merciful, and rightly so! Jesus is all of those things. He is about to demonstrate it in the very next verse by healing the man’s withered hand. But Jesus is not that way towards those who resist him. Jesus is not lovey-dovey with people who aim to corner him, to usurp his authority, to dismiss him as less than who he really is.

Humble Yourself Before Jesus!

There is a lesson here for all of us. The lesson is this: Jesus demands not only our full attention, but our full surrender and our full affection. Many people speak of Jesus or express interest in him. But this is not enough. The crowd that gathered there was interested in Jesus. They were just not interested in Jesus in the right way. They were only interested in what fault they could find in him. They wanted to know how they could dismiss him, how to chalk him up as a fraud, cast him off to the side, and get rid of him as a threat to their own throne.

People do this very thing today. They read the Bible, but not to learn it. They read it to mock it. People read the gospels, but not to discover Jesus. They read it to discredit him. People constantly encounter Jesus and instead of listening to him and following him, they seek to eliminate him by any means possible. And such people are met with the anger of Jesus, because they do not give the King the honour he is due.

If only the sentence had ended. If only the people’s hearts were in the right place. If only they cared more about what God wanted than what they wanted. If only they were willing to give up the reigns of their lives and turn them over to Jesus. If only they had the humility to worship Jesus as God instead of worshipping themselves as god.

What kind of person will you choose to be?

1 Comments on “The Sentence That Should Have Ended”