Why’s My NIV So Different From My KJV?

The New International Version (NIV) replaced the King James Version (KJV) as the world’s most popular English Bible several decades ago, marking the first time in about 400 years that something other than the KJV dominated the English reading population. As with any significant change, there have been bumps along the way. For instance, many people are shocked to discover that the NIV not only updated (read: modernized) the language of the KJV, but also changed the actual content of some of the passages.

And there are dozens and dozens more examples similar to these!

What’s With All the Changes?

Some people are so struck by the discrepancies between the KJV and newer translations of the Bible that they either (a) become a staunch opponent of all other versions besides the KJV or (b) lose confidence in the Bible altogether. In reality, there is no need to respond in either of these ways. There are perfectly logical, simple, and acceptable reasons for why these two Bibles seem so different from one another.

It helps to understand where these Bibles come from in the first place. The Bible was written originally in Hebrew (most of the Old Testament), Greek, (the New Testament), and some Aramaic (small parts of the Old Testament). Therefore, in order to get a Bible out to people who aren’t fluent in these languages, it must be translated.

Anyone who is bilingual or has worked on translating from one language to another knows that the process is not always easy. Words from one language don’t always have an exact equivalent in another language, and so the task becomes more difficult. How does one communicate accurately the thought without being able to use the precise words? This is one of the challenges of translating the Bible, and accounts for most of the differences between versions of the Bible in the same language.

But other challenges arise as well. For instance, we do not have the original manuscripts that the biblical authors wrote. All we have are copies. This means that there is the possibility of corruption; in other words, what the authors of the Bible initially wrote down could have been lost because other people changed the content as copies were made. It is similar to the game “telephone” I used to play in elementary school. A student would be given a message by the teacher, they would whisper it into the ear of the next student, who in turn would whisper it to the next, and so on, all the way to the last student. Inevitably, when the last student shared what message they received, it resembled nothing of the original! Could this kind of thing have happened to the text of the Bible?

The short answer is that, yes, that kind of thing could have happened. Actually, it did happen. But before you freak out and lose all confidence in the Bible, hear me out.

Go back to the telephone game. Imagine it is your job to play detective and figure out what the original message was. If all you had was the final message after it had passed through 30 students, you would basically be shooting in the dark. The chances of you getting it right would be something like 1%. But, let’s say, you were able to know what message was shared by the final 28 students? Do you think that you would be able to determine with much more accuracy what message was shared by the first or second? Most certainly!

It is similar with the Bible. The reason we can trust what we have as our modern day Bible, despite not having the original copies, is because we have many copies we can use to compare to each other. It is not as if we have only one version that we simply have no idea how much tampering has gone on with. Rather, we have thousands of copies of the Bible that we can compare with one another for accuracy. These ancient manuscripts range all the way back to near originals as well, some being written within the lifetime of the biblical author.

Here’s the truth: when it comes to ancient documents, the Bible has more wealth to draw from than virtually any other piece of ancient literature. It stands head and shoulders above the rest. If you compare the writings of the New Testament, for example, with the manuscript evidence from other Greek writings of a similar era, you can see that the Bible by far has more copies available to us than any other. It’s not even close! 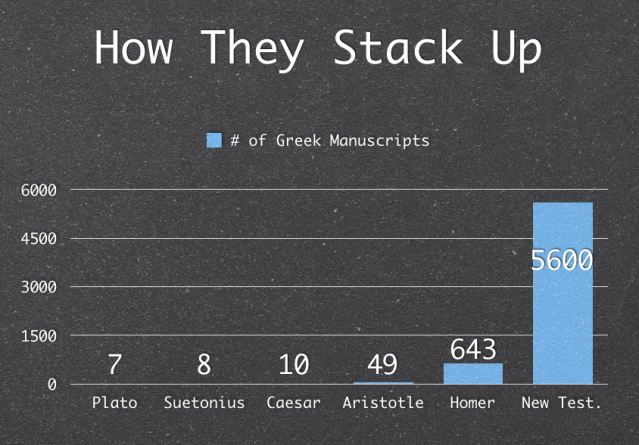 The New Testament has about 5,600 Greek manuscripts, or copies, to use in research. The next closest in Greek literature? Homer, with a whopping 643. Yes, read that sentence sarcastically. In fact, the writings of such highly touted philosophers like Plato and Aristotle have hardly anything of their own still kicking around, yet no one seems to question the authenticity or accuracy of their writings! If you include all of the manuscript evidence from the Old Testament as well, the number jumps up to the 25,000 range.

At this point, Bible scholars step in to do their thing. They are essentially tasked with laying out these 25,000 manuscripts (remember, no originals) and comparing them with one another to determine what the original text actually said. Because there are so many to compare and contrast – much more than any other ancient piece of literature – their task is actually a relatively easy one.

Bible scholars have two main things to help them in this process:

If you combine these two approaches, it increases your chances of determining the accuracy that much more.

What Are the Differences?

By some estimates, there are about 300,000 variations in the manuscripts. That may sound like a lot, but when you think that those 300,000 come out of 25,000 manuscripts, it means that about an average of 12 mistakes are found per copy. Also, about 95-99% of those variations fall under the category of nonsense errors, such as spelling mistakes. That means that any time someone misspelled a word, accidentally skipped a line, missed a word, accidentally doubled a word, or anything like that, it counts as one of the 300,000. And, remember, that every single one of these copies were done by hand. No photocopiers or printing press; just pen and parchment. How many mistakes do you think you would make in a gruelling process like that? If you had to copy out Isaiah by hand, do you think you might make 12 mistakes in the process? Seems likely!

Where the Trouble Starts

Of the roughly 300,000 variants, however, not all are accidents. A small percentage of them are more serious differences, such as the addition or omission of entire phrases or sentences. What are we to make of those? Scholars lay out the manuscript evidence they have and do their best to determine what the original text most likely said. Often, they can do this with a great deal of confidence. Occasionally, it is harder to figure out. In such cases, scholars go with what makes the most sense and then most modern Bibles place a footnote to inform the reader of the possible change in text. For example, these pictures are taken from my own Bible: 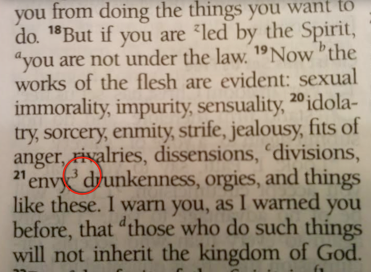 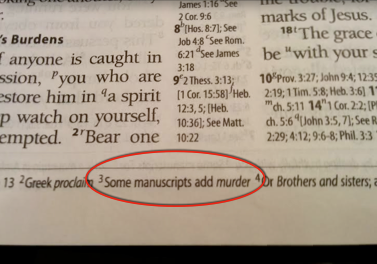 The first picture shows the text of Galatians 5:21, which clearly has a footnoted #3 next to the word “envy”. Skip down to the bottom of the page and notice the footnote says “some manuscripts add murder“. So, as scholars compared the manuscripts of Galatians, evidently some had the word “murder” listed in Galatians 5:21 while others didn’t. Scholars determined that omitting it was the most likely reflection of the original, but thought it was debatable enough to add the footnote that they could be wrong.

That means that not only is the English Bible you hold in your hand incredibly accurate, at the places where it is perhaps not people have been honest enough to tell you. Only a small fraction of the 300,000 variants are worthy to mention in footnoted form, because most are easily determined to be mistakes or blatant tampering and can easily be corrected. Pretty amazing, isn’t it?

The NIV vs. KJV

Back to the original question. Why does the NIV have a number of verses quite different from the KJV? The simple answer is this: since the KJV was published in 1611, we have discovered a lot more manuscripts of the Bible to add to the collection. For example, between 1946 and 1956, almost 1,000 new manuscripts were discovered in 11 caves along the coastline of the Dead Sea. It was one of the most significant archaeological findings of the 20th century. 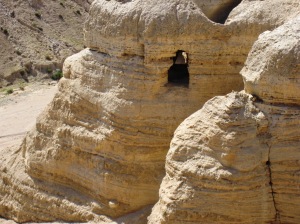 These new manuscripts have allowed us to compare the ancients texts to one another with even more accuracy. And, not surprisingly, some things that the original KJV said were found to be not a likely reflection of the original text. So, modern translations simply updated the Bible to best reflect what we believe it to say based on the most up-to-date manuscript evidence. Those updates were:

In other words, the NIV (and other modern translations) aren’t taking away from the Bible or corrupting it. Instead, they are actually refining it and restoring it. Again, the Bible you hold in your hands is incredibly accurate!

Simply put, you can trust your Bible, whether you are using an NIV or NASB or NKJV or NLT or ESV or whatever other modern translation you use. It is the Word of God, and has been amazingly preserved as such by God himself. If in doubt, remember that the accuracy of the Bible is more easily determined than any other ancient text 100x over. It is reliable, it is relevant, it is God’s revelation. Enjoy it as such!

← Do Muslims and Christians Worship the Same God? (Making Sense of the Fiasco at Wheaton)
Don’t Give God Leftovers →

1 Comments on “Why’s My NIV So Different From My KJV?”