Bill Nye Is Back to Save the World 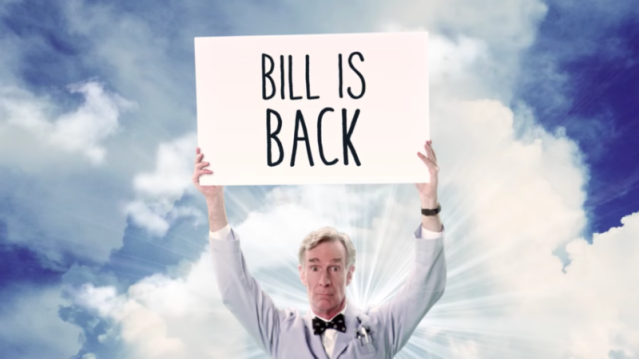 I remember watching Bill Nye, the Science Guy as a kid just like it was yesterday. The theme song for that show was so stinkin’ catchy that it is forever stuck in my head:

I would credit the show with giving me at least a moderate interest in science, where otherwise I didn’t hardly have any. Bill didn’t make science fun—rather, he showed kids how it was already fun. I know I’m not the only one out there who enjoyed the show far more than any science class in school. (Sorry teachers!)

So you would think that the announcement of a new Bill Nye TV show would pump me up a bit. An original series, the provocatively named Bill Nye Saves the World will be coming to Netflix on April 21. All 13 half-hour episodes are expected to be released at the same time (take note, binge-watchers). Unlike The Science Guy, this show is more of a talk-show mixed with science experiments mixed with comedy, geared towards adults rather than children. The show is expected to be met with great reviews.

I am legitimately interested to see it, but I must confess that a lot has changed since the bowtie-wearing buddy of my childhood last graced the screen on TV’s in my home. Growing up does that to you. Since those early years, Bill Nye has increasingly been vocal about his political, social, and religious viewpoints. He has every right to do so, of course, and is doing what almost anyone in his shoes would do: leveraging their fame into influence. But what really bums me out is that his influence, while once a joy to experience as a child, is now often met with an inner groan.

In recent years Nye has promoted, at least implicitly, the silencing of others who disagree with supposedly prominent scientific viewpoints. When asked if climate-change-deniers should be put in jail, he responded by saying “we’ll see what happens”, and compared them to the cons from Enron. While it is one thing to believe that those who hold minority viewpoints are wrong, it is quite another to suggest that perhaps it is not such a bad idea to lock them away for it. Nye didn’t say this should happen, but he certainly didn’t deny it, either. A tad extreme, don’t you think?

Also, in a viral youtube video, Nye criticizes those who would question the validity of evolution. He says “when you have a portion of the population that doesn’t believe in it, that holds everybody back”. He determines that to disbelieve in evolution leads to a worldview that is “crazy” and “untenable”. He then directly addresses parents by saying, “And I say to the grownups, if you want to deny evolution and live in your world that’s completely inconsistent with everything we observe in the universe, that’s fine. But don’t make your kids do it because we need them. We need scientifically literate voters and taxpayers for the future. We need engineers that can build stuff, solve problems.” Once again, Nye’s tolerance towards those who disagree with him has questionable boundaries. Though he doesn’t seem to mind the elderly dying off with their antiquated ideas, he is definitely against the sharing of these ideas with the next generation.

But perhaps nothing is quite as bothersome as his recent visit to Ark Encounter, a life-sized replica model of Noah’s ark built by Answers in Genesis. A lengthy video captures a number of cringe-worthy moments as he tours the exhibit with AIG president Ken Ham. The two have a number of interesting exchanges.

When Ham asks Nye how he can prove that information (DNA) arose from merely natural processes, Nye simply looks around and says, “Here we are.” But such a statement betrays even the basic laws of science. Taking an outcome and saying it supports your hypothesis only works if you were also able to observe the process. Yet no one has ever observed how the universe was formed. Just as an evolutionist would never consider “look around” to be a valid argument for creationism, the same is true in reverse.

During one part of the conversation, Ham accuses Nye of forming his beliefs not purely on the basis of science, but based upon his underlying belief system. Nye answers, “Yes, but the explanation that you provide is completely unreasonable to me and unacceptable and we’ve rejected it in science.” Ham asks in return, “Unreasonable to whom?”, a question which Nye never responds to.

It is painful to watch Nye state so strongly that Ken Ham’s creationist viewpoint is wrong, while fully admitting he cannot prove his own viewpoint is correct. This is anything but science in motion. Rather, what we are watching is a clash of worldviews and a prime example of self-contradiction. See for yourself in the following exchange.

Ham: So your views could be wrong?

Ham: So if your view could be wrong…

Nye: Absolutely, I have 100% knowledge that your worldview is wrong—that I’ve got.

I’m not sure a more contorted sense of logic could be put into words. Nye admits that science changes, because humans are constantly learning more and more about the world around them. Yet in the very next breath says that he is 100% sure that Ken Ham’s worldview is wrong. Shouldn’t he instead say something more like, “based on current scientific evidence I believe my assertions have more validity to them than yours do”? At least then he would be opening up the possibility that as science changes, it could support Ham’s view more than his own. But he is not willing to even concede the possibility.

Another exchange shows the same thing.

Ham: How would you prove to all these people here with 100% proof that the world is 4.6 billion years old?

Nye: That’s quite difficult. Over 4 billion we can [prove].

Ham: Okay, over 4 billion. How do you prove…

Nye: [Begins to explain how it can be done through radiometric dating techniques. Some of the dialogue is hard to hear clearly.]

Ham: How you do you know that the rates of decay haven’t changed?

Nye: We do our best to be a close as possible.

In other words, Nye says that there are scientific methods of trying to date the age of the earth. Ham essentially asks how we can know those techniques are reliable, since we are making the assumption that what we can observe through a short period of time (say, 75 years) is what we would see extrapolated out over several billion years. Nye’s response is that we are simply doing our best to be as accurate as we can be.

Read between the lines. This really means it is actually impossible to know if our techniques are accurate. We are just giving it our best educated guess. Nye knows this. He admits science changes. Yet he also asserts he can know with 100% certainty that other opinions are wrong. And I’m supposed to believe he is being intellectually consistent?

And if this weren’t enough, Nye even asserts at one point that it is “extraordinary, but not crazy, to suggest that we are descendants from Martians”. While the idea of life on Mars is a stretch for many people, even if we assume that it could be possible, how does that solve anything? All we have done is take the idea that life can arise from mere matter and back it up one species. If humans came from Martians, where did Martians come from?

The reality is that there is no current scientific explanation sufficient for how life arose from non-life. The best we can guess—apart from conceding divine intervention—is to say, “we don’t know”. This shows as clearly as anything else could that those who believe the universe has come into existence through merely material processes are no less taking a leap of faith than those who believe in a Creator. Neither can prove their theory in a test-tube. Neither was there. We both are looking at the same evidence and trying to deduce, what is the most probable cause? Creationists at least usually concede this to be partly a leap of faith. Nye, like many Materialists, simply will not.

So here is the Bill Nye message to creationists summed up: I’m not sure I’m right, but I’m absolutely sure that you are wrong.

It’s really too bad what has become of my once-favourite science guy. While Bill Nye still has so much to like about him—a genuine love for discovery, a sense of awe over the universe, and a very likeable persona—it is pretty hard for me to fully appreciate his contributions while knowing that he refuses to admit his viewpoints, just like those of creationists, are partly shaped by a specific worldview, not just science.

Bill is right about some things. We should ask the big questions and dig for answers. We should appreciate science and the way it helps us understand the world around us. We should seek learning and pursue education. We should have a sense of amazement that we get to be a part of this vast universe as a living and reasoning being. To all of these I utter a hearty “yes!”

But don’t let the lab coat fool you. Nye, like the rest of us, operates with a set of assumptions about life that shape how he interprets what can be observed about the universe. But unlike he suggests, science and faith are not at odds with one another. Indeed, they co-exist in the lives of millions and perhaps billions of rational people. And while the name of his new show may suggest otherwise, everyone’s favourite science guy is not here to save the world. That spot has already been reserved for Someone Else.

1 Comments on “Bill Nye Is Back to Save the World”