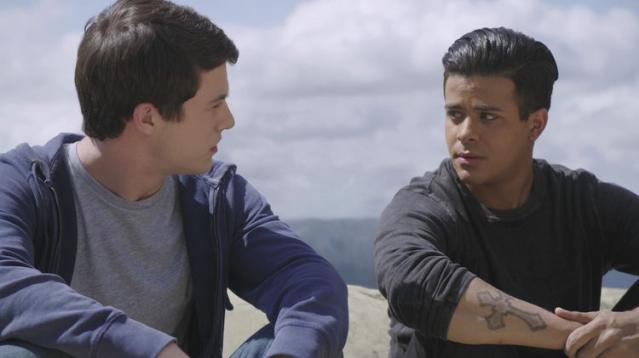 After watching 13 Reasons Why, there is much to be said about this wildly popular and controversial show. I will attempt to share some reflections in a series of posts over the next couple of weeks. I will link to other articles as they are published. Be warned, spoilers and tragedy ahead.

Reflection #1 – Why so popular?

Reflection #2 – A world without God

Reflection #4 – Your truth, my truth

Reflection #5 – Not escape, but revenge

One of the more interesting characters in 13 Reasons Why is Tony. At first, it is hard to know if Tony is a good guy or a bad guy, but as the show rolls on it becomes clear that he is well-intentioned. Tony was entrusted by Hannah Baker with the cassette tapes she recorded explaining her suicide, and she left him a final task: make sure that everyone responsible for her death listens to the tapes.

At one point in the show, as Hannah’s best friend Clay Jensen is struggling to make sense of the material on the tapes, he and Tony get into a lively exchange. Clay openly wonders if all of the things Hannah says on the tapes are true, or if perhaps she is misconstruing things or, even worse, flat-out lying. Other characters in the show certainly accuse her of misrepresenting their part of the story. Hannah says on tape 1, “If you want to hear the truth, just press play”….but does she really tell the truth?

The concept of truth and lies is an intriguing interplay in the show. Hannah’s tapes are intended to be a tell-all of what led her to take her own life. But those who are indicted on the tapes vary in terms of accepting their role in that event. Some fully admit that Hannah’s portrayal of them is accurate, but others accuse her of misrepresenting the truth. In several cases, only Hannah and the accused would be able to know the truth, and since Hannah is dead, how can anyone know what really happened? It becomes a matter of he-said she-said, and this turns the teens against one another.

Back to Tony and Clay. Clay questions the truthfulness of the tapes, including his own, and argues with Tony that Hannah isn’t being honest about what actually happened. “It’s not true!”, Clay contends, feeling frustrated about the whole matter. “She’s telling us her truth,” Tony retorts, trying to give him a different perspective of things.

Who can argue with that? Hannah tells us her side of the story, and now that she is dead and on record, it becomes hard to challenge her take of things. Who wants to accuse the girl who killed herself of lying? How can anyone prove her wrong? It’s no surprise that the characters all find themselves in a moral dilemma of sorts. On one hand, they all did things that contributed to Hannah’s misery. On the other hand, there may have been other circumstances to factor in that Hannah doesn’t bother to mention. She simply gets to tell her version unchecked, and everyone else must deal with it.

Scripture warns us about failing to consider both sides of the story. Proverbs 18:17 says “The one who states his case first seems right, until the other comes and examines him.” Problem is, Hannah Baker has made it next to impossible for the other side to share their version of events. She can’t be cross-examined. What she says goes, and because of that she paints many of her peers into a corner. Those listening to the tapes are left to wonder, do they deserve to be cornered? Or has Hannah manipulated the story to her own advantage?

Tony makes an insightful point when he says that Hannah is telling “her truth”. He implies that it doesn’t matter if her version seems off to you. Why? Because it was real to her. It is how she saw things, and no one can question it. People might not have tried to hurt her, but they did. Or, at least, she took it that way. How others see things doesn’t matter because how she saw them created the reality in which she lived…and it was something she didn’t want to be a part of any longer.

While Tony is absolutely right—Hannah was telling her version of the truth—it is very dangerous to suggest that such a notion is a good or acceptable thing. Is it right for Hannah to accuse someone of wronging her, even if they didn’t? Does how she take things override how things really were? In many cases, there is no doubt that Hannah was wronged by people in the show. But there are a handful of events where that is not necessarily so clear. Does she get to extend sweeping judgment in those instances just because she saw it that way? Or do those who are accused have a right to give their side of the story? Who’s truth can supersede someone else’s?

Pontius Pilate once posed this question to Jesus: “What is truth?” Is truth something that is objective, or is it subjective? Who gets to determine what is true when there is disagreement? If I see something one way and you see it another, who is telling the truth? You? Me? Both of us?

We live in a society that wants us to believe that truth is relative. What is true for you may not be true for me; we get to have our own versions of the truth. But this mentality is corrosive. When truth becomes untethered from reality and instead based on feelings, it becomes unhinged altogether. Truth ceases to be truth at all. All that is left are opinions and perspectives. And while opinions and perspective are useful, they are not solid foundations on which to build a life or a society.

Part of the reason there is so much vitriol in our culture is because we have lost the concept of real, objective truth. One of the most prominent examples of this in the show is when Hannah visits the school counsellor Mr. Porter as a last-ditch effort to reconsider suicide. She says it was her “one last chance at life”. She meets with him for only a few minutes and secretly records the conversation. She tells him that she is really struggling and does say at one point that she wants it all to end. It is a subtle suggestion at suicide, and Mr. Porter probes further, asking if she wants to hurt herself. Hannah refuses to talk about it, and Mr. Porter says that if she’s not willing to open up about things, there isn’t much he can do. Her only alternative is to try and move on. Hannah takes this as a rejection of help, leaves his office, goes home and kills herself.

Hannah clearly blames Mr. Porter for letting her down. The other students do too. Even Mr. Porter himself seems nervous when things go to trial that he might lose his job or be found to have broken the law. But I couldn’t help but notice that it is not so clear that Mr. Porter failed Hannah. It’s true that he could have perhaps tried a bit harder, but it is also true that Hannah shut down the conversation. In fact, she leaves his office and pauses outside the door, hoping he would come after her. He doesn’t, and Hannah blames him for giving up too easily. Yet it is worth asking, should he have chased after her? Is it a good idea to hound a student who is shutting down? I can say from experience that trying to have a student open up when they don’t want to can be counter-productive. Perhaps Mr. Porter was biding his time, hoping for a productive conversation soon thereafter. Little did he know it would never come.

Mr. Porter is legally obligated to report a student who he believes is in immediate danger of hurtful or suicidal behaviour. It is questionable if Hannah says enough to justify him doing so. Hannah seems to conclude on the tapes that he did fail her, but is that true? Just because Hannah wanted him to do more does not mean that he let her down. I feel bad for Mr. Porter. While I do think that he could have done more, it doesn’t help that Hannah was being passive-aggressive with him. When she comes to him for help and then shuts down the conversation, how is he supposed to overcome that? When she leaves his office but expects him to come after her, how is he supposed to know that is what she wants? This is one instance where Hannah is telling her version of the truth that might not be exactly as true as it ought to be.

The sum of the matter is this: Truth is real, and truth matters. People do not get to simply make up their version of the truth and then demand that others live by it. Hannah’s assessment of other people’s actions sometimes lacks a full and fair portrayal. Simply because she says she is setting the record straight does not mean that her perspective gets to go unchallenged. While her perception of the world around her is a painful one, that does not automatically assign blame to others. To be sure, many instances in the show are clearly sins against Hannah. But at least and handful are questionable. The truth might lie somewhere beyond her simplistic and one-sided viewpoint.

If we are going to make progress in helping hurting people find healing, the first step is to define reality as it actually is. Sometimes our perspective is what needs changing. To be sure, people need to be heard. They need empathy and understanding. But we ought not to allow people to define reality for themselves and then demand other people fall in line with it. Such a view of truth is destructive by necessity. It will breed only quarrels between competing “truths”. Rather, truth exists objectively outside of our subjective feelings, and we need to help each other pursue that. Your truth vs. my truth is a collision course that brings only casualties.

Hannah’s world was full of pain, but she believed that there was only one way out. She had defined her own truth, and needed someone to show her a reality that was different from the one she found herself enclosed in. The truth is that suicide was not the only option. It was not even the best option. But Hannah had boxed herself into her own version of the truth, and it killed her. Sometimes the best thing we can do for someone is challenge their sense of truth. But to do so begins by understanding that truth is not based on a person’s individual feelings. Such an idea just might suck a person into their own early grave.

← 13 Reasons Why: Reflection #3 – Maybe there aren’t any good kids
Which Bible Translation Should I Use? →