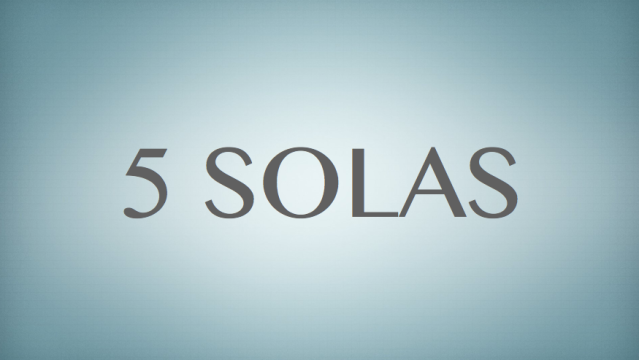 This year marks the 500th year of the Protestant Reformation. The Reformation began when men such as Martin Luther, John Calvin, and Ulrich Zwingli began to protest certain beliefs and practices of the Catholic church. Believing the church had strayed from biblical Christianity, they sought to reform the church and bring it back to its true form. Half a millennia later, the differences still exist between Protestants and Catholics and resolution has not been achieved. The reformers eventually developed what became known as the 5 solas, which are 5 core truths that define the essentials of the Protestant Reformation.

I remember the first time I ever read the 5 solas. I was in my early twenties and had recently been re-examining the faith that I grew up with. For the first time in my life, I was reading the Bible for myself. I soon discovered that certain convictions were developing in me as I read Scripture and sought to make sense of it all. I couldn’t quite articulate them, but I could tell when someone else “got it”. Then, one day, I stumbled upon the 5 solas. Immediately I thought to myself, this is it! This is exactly what I’ve been thinking! This is exactly what Christianity is all about! It came as a great relief to me that my blossoming faith was rooted in rich history and that others before me saw in Scripture what I also believed I saw.

Since this discovery, I have learned a lot more about the Reformation, church history, and Christian theology. I have no reservation saying that I am a Christian who stands proudly in the reformed heritage, and the 5 solas to this day still make up the core convictions I carry as a follower of Christ. The more I read Scripture, the more I see these beliefs present in the pages of God’s Word, and the more firmly established they become in my life. They shape my beliefs, my practices, and my preaching. Anyone who has been influenced or discipled by me has been under the influence of the 5 solas—whether I have bothered to tell them or not!

Scripture is our highest authority in life. It is the place where Christians formulate doctrines and evaluate practices. Though truth can be discovered in many places, the Bible is God’s standard for truth and all truth must be judged against it. Since the Bible is God’s Word, it is perfect and trustworthy in revealing to us who God is and who we are in relation to him and each other.

I have a saying I regularly use in my Bible teaching: It doesn’t matter what I think, and it doesn’t matter what you think. What matters is what God says. This philosophy shapes the way I preach the Bible. My goal is not to be clever or novel, but rather simply to do the best I can to show people what the Bible actually says. One measure of a good Bible teacher is how well they can help other people see in the Bible what they see themselves. Authority does not come from a pastor, and it doesn’t come from a church. It comes from God’s Word. Therefore the Bible must be absolutely central to guiding a Christian’s life.

Reformed Christians believe that the Catholic church assigns too much authority to the pope, the institution of the church, and the writings of the early church fathers. I tend to agree with that assessment. As such, the Catholic church has formed various beliefs and practices that are hard to square up with what the Bible says. The reformers sought to turn people away from other sources of authority and back to the Word of God, and in that quest I happily join them.

All Scripture is breathed out by God and profitable for teaching, for reproof, for correction, and for training in righteousness (2 Timothy 3:16)

How can a sinner be justified before God? The answer to that question is perhaps the most central belief in Christianity. God is holy and we are not; therefore, God has every right to punish sinners and condemn them for breaking his laws. This is a major problem, since all of us are guilty sinners before God. Is there hope? Can anything be done about this looming dilemma?

The answer from Scripture is that a person can be justified before God by faith alone. Faith in the atoning sacrifice of Christ is the only means by which a person can be saved from hell. Good works will save no one. No one will have their sins forgiven because they have earned it. No one can earn God’s forgiveness, and those who try are destined to be found unrighteous in God’s sight. But those who trust Christ, who have faith in his death on the cross for their sins, are forgiven completely and made right before God.

It is not faith plus good works, or faith plus monetary donations, or faith plus baptism. No, salvation comes through faith alone, and we must be insistent on making that clear; otherwise, we are guilty of preaching a false gospel.

For we hold that one is justified by faith apart from works of the law. (Romans 3:28)

This means that no Christian should ever have a prideful spirit. No one earns their own salvation, and so no believer should ever look down on anyone else. Any Christian who is prideful has forgotten that their salvation was by God’s grace alone. They didn’t earn it. Rather, it is a gift of God’s generosity. Therefore, the right spirit for a follower of Christ to have is of thankful humility.

For by grace you have been saved through faith. And this is not your own doing; it is the gift of God, not a result of works, so that no one may boast. (Ephesians 2:8-9)

The free gift of salvation comes to mankind through one person and one person alone, the Lord Jesus Christ. Jesus himself said “I am the way, the truth, and the life. No one comes to the Father but by me” (John 14:6). In this remarkable statement, Jesus is claiming himself as the exclusive path to God. While it is a popular idea that there are “many paths to God”, the Bible—and Jesus specifically—says otherwise. Christ alone provides access to God and eternal life, and any other path ultimately leads to death.

Christians have stood on this unpopular and inflammatory claim for 2,000 years, even at great cost to themselves. We do so not because we desire to be divisive, knock down other religions, or think we are superior to others. Rather, we simply agree with Jesus! If he really is the only path to God, then we are compelled to follow him. And because we love people, we desire to point them to the only place they too can find salvation for their souls. Simply put, Christianity is all about Jesus.

And there is salvation in no one else, for there is no other name under heaven given among men by which we must be saved. (Acts 4:12)

5. Soli Deo Gloria (to the Glory of God Alone)

God alone is worthy of glory. He is worthy of our praise and adoration and dedication. Christians seek to live not for their own fame, but for the fame of God’s name. Salvation is ultimately not about boosting our self-esteem, but about God displaying his glory through the death and resurrection of Christ for our sins. That is the greatest act of love the universe has ever known and will ever know. It follows, then, that believers should be dedicated to orienting their lives around God and not themselves. In this way we experience the joy of freedom from self-centredness and fulfill the task we were created to do, which is to glorify God.

I believe with all my heart that the 5 solas are a helpful and beautiful way to summarize the Christian faith. They are not equal to Scripture itself, but they do help to rephrase the points of emphasis in God’s Word in a way that is memorable and clarifying. I, for one, am grateful for the work of the reformers, as imperfect as they were. I’ve never felt very comfortable when people refer to guys like Luther as “the great Martin Luther”, but I nevertheless believe that God used the reformers in great ways to strengthen his Church. Protestants are by no means perfect, but I do believe that we are faithful to the teaching of the Bible, and in that belief I commit myself and my life as a minister for God. May the Reformation, 500 years later, continue to propel God’s true and powerful gospel into the world for salvation of many souls!

← To Hell With Racism
On Safe Spaces and Trigger Warnings →