Jesus Is Alive, And That Ain’t No Joke!

This year Easter landed on April fools day, a rare occurrence that is set to happen again 11 years from now. For Christians, the coincidence is looked on with a bit of humour, spawning a few comical memes such as this one: 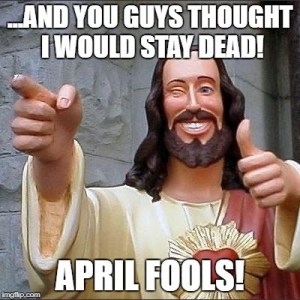 For skeptics, it’s an opportunity to poke fun at the Christian faith, seeing believers as gullible morons on par with the goof who falls for an April fools day prank.

But despite the sillyness of April fools day, the claims of the Christian faith are no joke. At the core of Christianity is the claim that Jesus Christ is the Son of God who died for sins and then bodily rose from dead three days later. This is the heart of the gospel, and without these elements Christianity completely falls apart.

Even the Bible admits this. 1 Corinthians 15:12-19 lays out some of the consequences if the resurrection of Christ did not really happen.

If resurrection is truly impossible, it means:

These are big time consequences. If Jesus didn’t rise from the dead, Christianity is not only a complete lie but it is a giver of false hope based on utter deception. I take these things seriously. I do not take my faith lightly and I would reject it in a heartbeat if I felt there was good reason to. Why am I wasting my time in prayer, resisting sin, making myself look like an idiot to half the world by preaching Christ, and leading people down a path that is not actually going to make any difference in their afterlife? I DON’T WANT TO DO THAT. I sincerely mean it. It would be so much easier for me to quit being a pastor, quit being a Christian, and live a “normal” life like most other people. I could make decent money, not be looked at like a weirdo, and just enjoy life. But instead I commit myself Jesus, a man I have never seen with my own eyes, heard with my own ears, or touched with my own hands. Am I completely nuts?

I have seriously considered these things. Some people are just religious because they were raised that way but never really question it or grapple with the implications. But I have, and still I cannot walk away from Christianity. And the reason is because I believe there is sound reasons to believe that Jesus really did rise from the dead and that this whole crazy thing is true.

Put aside any personal feelings, either positive or negative, and just look at the facts.

Only a tiny minority of scholars with any credibility believe that Jesus was a ghost from the past. Almost every single reputable historian recognizes that there was a man from Nazareth named Jesus who caused quite a stir about 2,000 years ago.

Again, every reputable piece of historical evidence confirms that Jesus died on a cross by government execution. Muslims reject this idea but have no evidence to back it up. All of the historical accounts about Jesus that are reliable and close in proximity to the events confirm his death on the cross.

Fact #3 – Jesus’ tomb was empty on the third day, and his body was never recovered

Once again, every shred of historical evidence confirms that Jesus’ dead body was missing from his tomb and was never discovered again.

Fact #4 – Hundreds of people were convinced they saw Jesus resurrected

It would be one thing for a couple of people to claim to have seen Jesus risen from the dead, because then you could just chalk it up to them being whacko.  But instead that number is at least in the hundreds. People came forward in droves claiming to have seen Jesus alive again despite (a) the risk of sounding like an idiot, (b) Jews didn’t even believe in bodily resurrection, (c) associating oneself with a condemned man was likely to result in personal danger, (d) there was nothing to gain from lying about it. Not to mention that these claims were never refuted. Some suggest is was hallucination, yet at least one appearance involved roughly 500 people at the same time. Hallucinations are always personal events, not crowd-shared experiences.

Fact #5 – Christianity exploded despite great persecution against it

Immediately following these events, followers of Christ multiplied and spread like wildfire. This makes absolutely no sense unless hundreds of people saw Christ with their own eyes and spread the news. Both the Romans and the Jews aimed to shut down the movement by force but were unsuccessful. How could a tiny group of people multiply in thousands in just a few weeks unless something remarkable had caused it?

Fact #6 – There are no reasonable explanations for these facts other than a real, literal resurrection.

Many have tried to explain away the resurrection, but as far as I can see, no one has supplied a historically supported, reasonable, sufficient alternative explanation. Many have tried, but all have failed.

Jesus didn’t exist? Historical data is more convincing that he did than almost any figure of the past, bar none.

Jesus was never crucified? Literally no source close to the events makes that assertion.

Jesus only passed out on the cross? He was beaten, nailed, stabbed in the heart by professional executioners, then left in a cold tomb for three days with no medical attention. He was dead.

The disciples stole his body? Good luck pulling that off with the tomb under Roman guard. Not to mention that doesn’t explain his post-mortem appearaces.

People hallucinated? Not by the hundreds they didn’t.

The disciples simply lied and gullible people believed them? Considering that the cost of believing that lie meant certain persecution, no one would do it without VERY CONVINCING reasons.

In short, the most logical (albeit supernatural) explanation of the data is that Jesus really did rise from the dead, and that’s why the most unstoppable movement in the history of the world began. I cannot believe anything else without recognizing that I’m sticking my head in the sand and ignoring the facts.

Either the resurrection of Jesus Christ is the most remarkable, elaborate, well-orchestrated, and wide-scale hoax in the history of the world, or it’s just simply the truth. It actually takes more faith the believe it’s a lie than to believe it’s true.

Some people have said that they would believe it only if they saw it with their own eyes. But I think that’s nonsense. We put people in jail all the time without anyone having seen them commit the crime. This is because circumstantial evidence is often overwhelming enough to believe something happened without having been there to see it. Such is the case with Christ. The circumstantial evidence surrounding the resurrection is so powerful that anyone with an unbiased eye looking at the information must come to the same conclusion. But alas, we are not unbiased people, and believing in a risen Jesus requires a leap into the supernatural as well as consequences about things like the meaning of life, morality, the afterlife, and so forth. Many people see what a resurrected Jesus would mean to their lives and deem it not profitable, so they invent rationale to reject him. But one day I fear that the joke will end up on them.

All I ask you to do is truly consider the facts. Follow the evidence where it leads, no matter the cost. That’s what a true seeker of the truth is willing to do. Are you?

← Stephen Hawking and the Design of the Universe
Noise! Noise! →

1 Comments on “Jesus Is Alive, And That Ain’t No Joke!”