On Equity, Marxism, and Critical Theory

In order to assess the secular movements against racism, we must first understand the foundations of them. I finished my last post stating that the secular battle against racism springs from a desire for equity among people groups. Here I explain what that means.

The term “equity” as it pertains to social conditions is essentially equivalent to the phrase “equality of outcome”. This would be in contrast to the concept of “equality of opportunity”, a different approach to addressing social ills.

Equity, or equality of outcome, seeks to even out the life experience of people groups. For instance, it would be against a capitalist economy where the super-successful are a tiny percentage who control the vast majority of wealth. In search of equity (a more equal distribution of wealth), you would need to put structures in place that prevent the rich from getting richer and the poor from getting poorer, such as higher tax penalties for rich people. Conversely, equality of opportunity aims to make a successful life at least theoretically possible for anyone who is willing to work for it, not giving any advantages or disadvantages to anyone. This image illustrates the idea well: 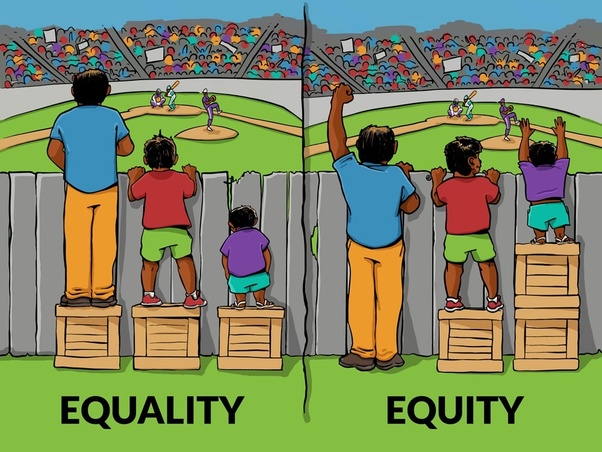 Understanding this concept is fundamental to critiquing our current battle against racism. This is because one line of thinking would essentially say “the American dream is available to anyone who wants to go out and chase it”, while the other would say “certain people need extra help, while some need extra hinderances, in order to maintain equality among people’s quality of life”.

Even though this blog post is about racism, I begin with economics because one needs to know Karl Marx before they understand Critical Theory and how it is currently playing out in the world. Marx was an economist whose ideas were fundamental to the birth of Communism. Marx essentially looked at the disparity between the rich and the poor and argued that the cause of it was oppression. He posited that the rich got rich by trampling on the poor and making sure they are kept down. He therefore proposed an economic structure that took power away from the rich and gave it to the poor, hoping to achieve greater balance. Essentially, he sought economic equity (equality of outcome).

It is fair to say that history has proven his theory to be a colossal bust. Everywhere that Communism has taken hold, crushing poverty and government tyranny has resulted. This is one of the major things we can learn from the last 150 years of human history.

Instead of dismissing his ideas, many sociologists doubled down on them and actually expanded them. This gave birth to what we now know as Critical Theory, sometimes called Cultural Marxism (some would disagree, but I see both terms as almost synonymous). Critical Theory takes the idea from Marxism that disparity among people is due primarily to oppression. They expand this, however, beyond the realm of economics and into other categorizations of life. For example, not only do the rich oppress the poor, but whites oppress blacks, men oppress women, police oppress citizens, skinny people oppress fat people, and so on.

This is the lens through which Critical Theory sees the world. It identifies a place where there is a difference of outcome, automatically assumes it is a result of oppression, and then seeks to attack the oppressors while empowering the oppressed. If you are someone who pays attention to the news at all, this ought to be something you can see clearly being played out before our very eyes.

This is why, for instance, ideas like high taxation for the rich, white privilege, feminism, and defunding the police are all so popular. These are attempts by the proponents of Critical Theory to level the playing field. It springs from the notion that oppressors need to be attacked and the oppressed need to be empowered.

This is the dominant approach of culture towards the issue of racism. It is cultural Marxism playing out in the real world. Those who adopt this view (aka Woke), believe that white people are fundamentally part of the oppressive system that keeps minorities down, especially blacks. Thus, the whole system needs to be toppled since it is built on a foundation of white supremacy. This is where the concept of systemic racism is born. Racism is built right into the structures of society so that, even if a white person doesn’t think themselves to be racist, they can’t help but be. They partake of a system that lifts them up and keeps others down.

Once again, I think there is strong reason to push back on this line of thinking. The first is that it is built on a foundation of massive, unprovable assumptions. Critical Theory demands the belief that the best way to see the world is through the lens of oppression. Yet I believe there is strong reason to question this. The Communist experiment proved that this concept was flawed as it pertained to economics. Why should we assume it is more accurate in other spheres of life? It also clearly does not take into account the major factor of personal responsibility. Critical Theory assumes that all people want to work hard and make the most of their opportunities. Yet even a cursory glance at life around us proves this assumption false. Some people are able to achieve much with very little, while others with much squander it away. The fact that this reality is completely absent from Critical Theory makes the starting point inherently flawed.

Critical Theory also operates from a point of envy. Though it sounds nice on the surface (“I just want everyone to be equal”), the motives can be much more nefarious (“They have what I don’t, and I want it”). It can be a very convenient way to hide behind covetousness. I would again point to the results of Communism as proof. Communism arguably killed 100 million people in the 20th century. Scripture explains why. James 4:2 says “You desire and do not have, so you murder. You covet and cannot obtain, so you fight and quarrel.” Hostility and murder spring from a coveting heart. Though I would not charge all who adhere to Critical Theory as examples of this, many certainly are. If we know anything about human nature, it is that we are far more evil than we dare believe, and that our own intentions can be incredibly deceitful.

If you want more recent examples, see the looting of stores (including killings) and creation of autonomous zones as examples of peoples thirst for material possessions and power that comes under the guise of fighting against oppression.

Critical Theory also implies that successful people are automatically oppressors. Obviously, we know that many rich people are oppressive and can get away with doing so because of their financial resources. The same book of the Bible I quoted above speaks of rich people oppressing the poor (James 2:6). But this is still a wrong assumption to make, since other rich people are benevolent with their money. I would argue that the Bible presents roughly four categories of people in this regard:

However, this model doesn’t fit into the framework of Critical Theory. In fact, I would challenge anyone to prove from Scripture that Critical Theory is a way of thinking that springs from the Bible. Unfortunately, Christians who adopt this view are simply flinging around the term “justice” to defend their views. I would argue that to defend Critical Theory under the guise of biblical “justice” is an abuse of Scripture and nothing more than slapping biblical language on top of completely secular thinking.

The Bible nowhere argues for equity, or equality of outcome. Was it not God who richly blessed Abraham? Was it not God who chose Israel to be his people? The Biblical picture is that our life circumstances are made up of a combination of God’s providence, the choices of others around us, and our own choices as well. God determines when and where we are born (Acts 17:26). Our parents and our communities make choices that affect our lives. And lastly, we make our own decisions in life which operate on the principle of reaping what we sow. The Bible doesn’t outline how God’s people are to be revolutionaries against the system, but what it does do is teach us how to live out a Kingdom ethic in the midst of a corrupt and broken world. These are not the same thing.

We need to know these things because seeking godly solutions requires properly defining the problems. The foundation of Critical Theory is flawed and unscriptural; therefore we ought to reject its solutions. Racial tensions are not properly and fully explained by stating that white people oppress black people and thus the answer is to reverse the paradigm of power. Rather, racial tensions spring from sin in the human heart that requires the healing balm of God’s love. It completely baffles me that believers are attempting to fight the battle against racism while leaving the most potent weapon at home: the gospel. Do we not know that only Christ can change the human heart? That only Christ can unite people? If we feel that we can fight the battle against racism without consulting Scripture, without recognizing the need for concepts like sin, forgiveness, sanctification, and the imago Dei, then we are fooling ourselves.

The Church needs to recognize that we have a unique voice in this discussion. We operate from a worldview founded on Scripture, not on Marx. I fear that we are knowingly, and unknowingly, adopting worldly patterns of thought. Until that changes, we fail to be the light that this world so desperately needs.

← On White Privilege
What You Should Know About #blacklivesmatter →

3 Comments on “On Equity, Marxism, and Critical Theory”